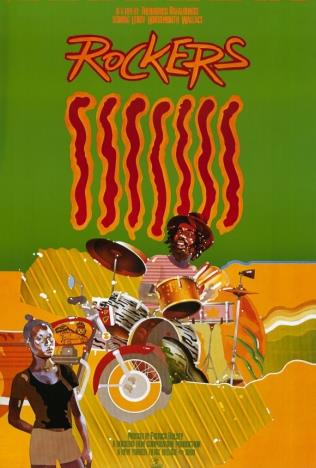 Sounds from the golden age of reggae pulse through this breezy 1978 drama. ” Chicago Reader

Rockers is a 1978 Jamaican film by Ted Bafaloukos. Several popular reggae artists star in the movie, including Leroy “Horsemouth” Wallace, Burning Spear, Gregory Isaacs, Big Youth, Dillinger, and Jacob Miller & forms part of TPH’s Reggae & Ska Film Festival.
Rockers was originally to be a documentary but blossomed into a full-length feature showing the reggae culture at its peak.

In this film, the culture, characters and mannerisms are authentic. The main rocker Leroy “Horsemouth” Wallace, for example, is shown living with his actual wife and kids and in his own home. The recording studios shown are the famous Harry J Studios where many roots reggae artists recorded during the 70s including Bob Marley. Samples of the film’s dialogue were used in the early 1990’s jungle track, “Babylon” by Splash. The Jamaican Patois spoken throughout the film is rendered with English language subtitles for a foreign audience.