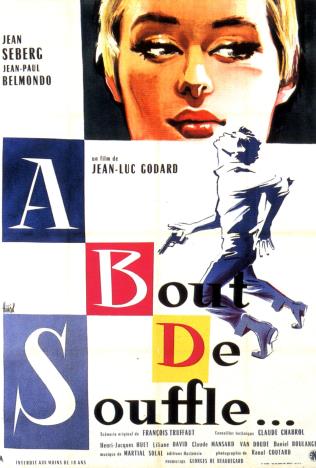 Modern movies begin here, with Godard's Breathless. No debut film since CITIZEN KANE has been as influential." 4/4 Stars ” Roger Ebert

A cornerstone of the French New Wave and one of the most influential films ever made Breathless (À Bout De Souffle) continues to be “the epitome of cinematic cool”.
The debut feature of Jean-Luc Godard, starring Jean Seberg and Jean-Paul Belmondo, based on a story by Francois Truffaut, Breathless, now restored in 4K, is a must-see!

Petty thug Michel (Jean-Paul Belmondo) considers himself a suave bad guy in the manner of Humphrey Bogart, but panics and impulsively kills a policeman while driving a stolen car. On the run, he turns to his aspiring journalist girlfriend, Patricia (Jean Seberg), hiding out in her Paris apartment while he tries to pull together enough money to get the pair to Italy. But when Patricia learns that her boyfriend is being investigated for murder, she begins to question her loyalties.