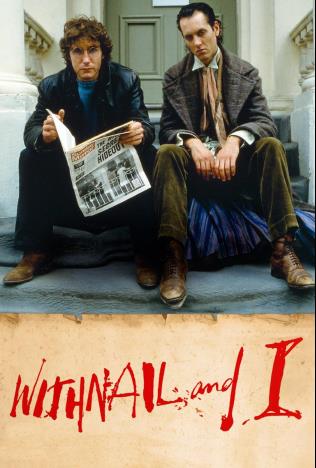 a dark comedic masterpiece from Handmade Films and one that Thom Yorke can recite every word from! ” TPH

RADIOHEAD WEEK: Thom”s 2nd fave movie. Camden Town, the arse-end of the sixties. Two struggling, unemployed actors decide some respite is in order and so depart their miserable flat for a week in the Lake District, one that will involve rain, booze, minimal supplies, a randy bull and an even randier Uncle Monty.

Withnail and I has become one of British cinema’s most fondly remembered comedies. A cult film in the truest sense that has also become a classic. Perfectly cast with career-defining roles for Richard E. Grant, Paul McGann, Richard Griffiths and Ralph Brown and crammed with irresistibly quotable dialogue, Withnail and I is a sheer delight, even on the umpteenth viewing. If you demand booze, we can help you.

We have it on good authority that Thom Yorke can recite every line from this film and is probably his second fave film after 2001 A Space Odyssey.